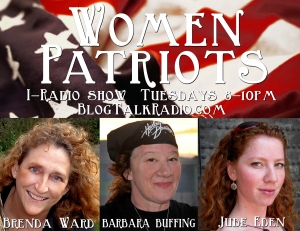 Three politically passionate conservative women are launching a new show called “Women Patriots” on the popular internet broadcasting site BlogTalkRadio.com.  Brenda Ward, Barbara Buffing, and Jude Eden will co-host the show with various guests.  Ward, a registered nurse in Fort Wayne, Indiana, first got into internet broadcasting in support of Herman Cain when he joined the 2012 presidential race in the Republican primary.  Her first show was another collaborative effort under the Conservative Nation Radio umbrella on BlogTalk. The show’s creators were looking to do a regular broadcast with women and Ward volunteered.  “What I like most about it is being able to give voice to the conservatives and Christians in America and meeting new people from all across America who are of a like mind,” Ward says.  Barbara Buffing, a conservative activist in North Carolina, became more involved in politics in 2011. She came on board at first to do promotions and then ended up co-hosting with Ward.

The two came across Jude Eden when the Obama administration announced it was opening military combat units to women.  Eden, a Marine combat veteran, conservative writer and activist in North Carolina, had written several columns on the subject.  This caught Buffing’s attention and Eden was invited on the show as a guest.  For the new Women Patriots show, Ward says, “I always liked the idea of having a 3-4 woman panel, each with a different background to add depth to the conversation.  Jude’s military background and knowledge, having “been there,” were things we considered because she has a perspective we do not.”

Working behind the scenes with the trio is Teresa Bruski, a health care professional in Minnesota.  Ward met Bruski through their mutual support of then-candidate Cain.  Bruski was the Minnesota state leader for his campaign, and she and Ward have been working together ever since.  The goals of the Women Patriots show are to reach to a wider audience, to educate and cover stories main stream media won’t, and to support conservative candidates for office.

Guests for the premier will be Jan Morgan and Karen Siegemund. Jan is a Nationally Recognized 2nd Amendment advocate and speaker, a certified firearms instructor and founder of Armed American Woman, a national firearms training program for women.  Siegemund founded the activist organization Rage Against the Media, an activist organization that fights for objective reporting by news organizations.

The show premiers October 22nd from 8-10pm eastern time and will broadcast weekly on Tuesday nights at www.blogtalkradio.com/lady-patriots.