“Do we have more chairs?”  By ten to six Tuesday night at the New Hanover County Library, the Live Oak Room was already packed wall to wall.  Concerned citizens from several counties and both sides of the isle gathered to learn more about the negative impacts of Obamacare and the proposition to defund it that is being advocated in town halls across the country while Congress in on its summer break.

Lead by local conservative activists Jude Eden, Ginny Quaglia and Mary Ann McCarthy, the two-hour program consisted of seven speakers followed by Q&A.  Empty chairs were labeled for Mike McIntyre, Richard Burr, and Kay Hagan who were each invited but declined.  All have stated they are not holding any town halls while on recess. 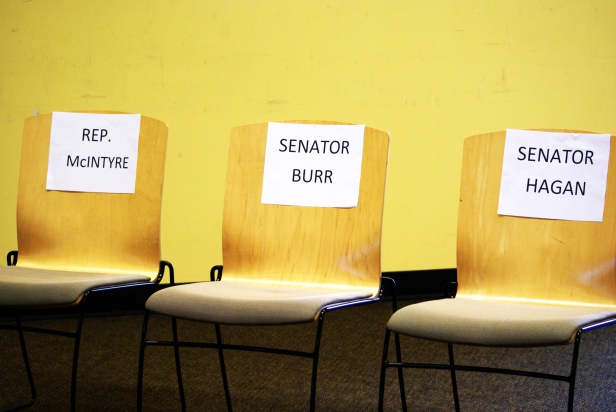 “We can fund the government and we can fight funding Obamacare.  Don’t fall for the false choice,” said co-creator Mary Ann McCarthy.  “We’re here tonight to help you understand how crucial it is to defund this huge train wreck.”

Cardiologist, author, and radio talk show host Dr. Tony Maglione said Obamacare would hit the elder population first and hardest. “There are 7 million baby-boomers coming into the market of Medicare every year.  They’re going to have the IPAB, fifteen bureaucrats making decisions, which is going to try to control costs.  How are they going to do it?  They [seniors] are going to end up not having certain procedures, not paying for certain treatments, and that means you’re going to get delays and you’re going to suffer more, and some will die.”

Pattie Curran‘s testimony drew gasps from the audience as she gave example after example of how her family’s costs have skyrocketed, making it nearly impossible to provide her children, who suffer from serious chronic diseases, with the care they need.  OB/GYN and U.S. Senate candidate Dr. Greg Brannon focused on the statutes of Obamacare that violate the powers enumerated in the Constitution and infringe on our individual rights to life, liberty and the pursuit of happiness.  “It prohibits discrimination of assisted suicide.  That’s attacking life.  Liberty?  With the individual mandate, where’s your right to say no?  Pursuit of happiness? Section 9001 is the list of all the taxes.”

Combat veteran and NC3 candidate Jason Thigpen reminded us of what veterans have to go through NOW under the government-run healthcare system that is the VA.  Picture the atrocious VA backlog, waiting 18 months on average for a claim, across the whole nation’s health care.  Francis De Luca, president of the NC Civitas Institute, explained the process of the continuing resolution, to which Ted Cruz’s defund bill must be attached, and explained the process by which we can ensure the government is funded without funding Obamacare.  He explained, “The government runs out of money at the end of September, so in order to continue funding you have to pass a continuing resolution which states which states how much government can continue spending without a budget.  All you do in the continuing resolution is say no money can be allocated to implement Obamacare or to write regulations.  Very simple.  So when people say you can’t do it, yes you can. Now, do you have the political courage?”

NCGOP chair Claude Pope talked about the negative impacts on small business such as reduced hours, layoffs, and more, as well as the NCGOP’s Resolution to Defund.  The Resolution recently passed unanimously in Boston.  He also spent some time advocating for Republican  majorities if constituents want to see the change they’re asking for.  This didn’t sit well with conservative talk show host Curtis Wright, who was in the audience and said, “The Republicans telling us that they have these rules we have to play with doesn’t cut it, because when these folks have to carry that burden and push that elephant up the hill, over the hill and over the line, they don’t’ forget that.  2014 and 2016 can’t be about a senator telling us, ‘Well, you don’t understand.’  In particular my frustration is with people like Renee Ellmers who told me over and over again, like many Republicans have, ‘This is what I will do.’ And then when they get there, they don’t do it.  We have to have more than just political speech.”

Many Republicans say they will fight for principle when they have the majority.  This is backwards.  If they fight for conservative principles, they will earn the majority.  With an overwhelming majority of the country opposing Obamacare, Republicans should be persuading those Democrats who also oppose it, including its author, Senator Max Baucus) to help vote to Defund what they themselves have called a train-wreck and a disaster.

The Wilmington Town Hall was one of many happening around the country aimed at defunding Obamacare. 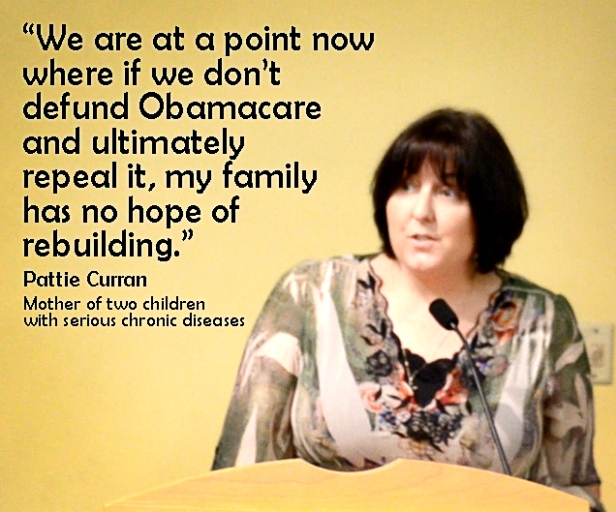 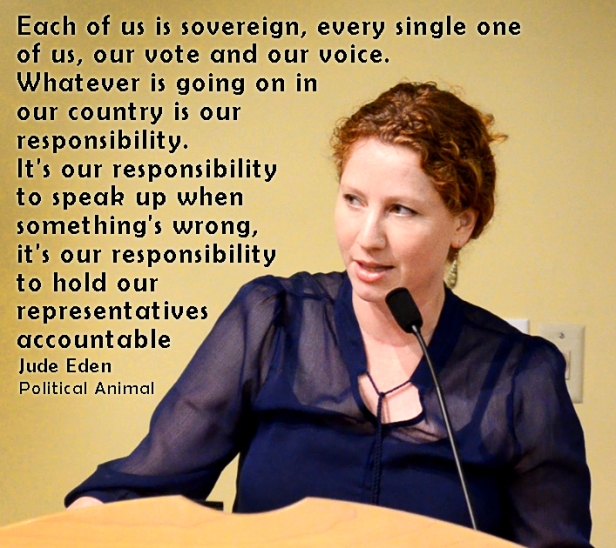