It is said that from the darkest clouds come the brightest lightning.  After Aaron Vaughn, a Navy SEAL on SEAL Team 6, was killed when the team’s helicopter Extortion 17 was shot down in Afghanistan, the Vaughn family was absolutely devastated.  Yet out of the family’s grief has developed a bright light of healing for the children of fallen American war-fighters.

Tara, Aaron’s oldest sister, was trying to come up with a way to honor her brother’s life and make a difference.  Karen Vaughn, Aaron’s mother, says, “One thing we kept hearing everyone say was how difficult is was going to be to teach the children to be like their father without a male influence in their life.”  Thus Operation 300 was conceived as a camp for kids whose fathers have died in combat defending our freedom and way of life.  The camp brings together volunteers and families to teach the surviving children the kinds of things their fathers would have.  From their website: 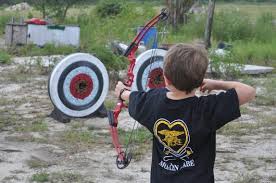 “Operation 300 is a non-profit foundation designed to create a week long experience for children who have lost their fathers as a result of service to our country.  The camp will provide an opportunity to participate in activities that embody the spirit of adventure that characterized the lives of their absent fathers while fostering a culture of courage, strength, freedom, endurance, honor and godly morality embodied by fearless patriots throughout the history of our American Republic.”

Kids come from all over the country to enjoy activities from fishing, archery, horseback-riding and much more.  Mothers are put up at a nearby hotel so that they can have a relaxing weekend themselves and also remain close by in case they are needed.  The first camp last April was a tremendous success and consisted of just ten little boys.  The next one, the foundation’s third, begins on November 22nd will have 21 boys and 7 girls.  The Gator Boys will spend the weekend with the kids for some “full-out crazy-time fun for the kids,” as Karen puts it.

The Operation 300 camp is a beautiful and healing experience provided to the families of those who gave all in service to liberty.  But with so many fallen men and women to our over-ten year wars in Iraq and Afghanistan, now the challenge for the Vaughns is to meet the high demand.  They are actually having to turn families away because they don’t have the resources to support the demand.  “We need resources, facilities and land to keep the camp running, to keep providing this experience for these kids.”

Please help us to spread the word about Operation 300 and go to their website and donate as generously as you can.  Find them at Operation300.com, on Twitter at @Op300 and on Facebook.com/Operation300.