On January 1st Secretary of the Navy Ray Mabus ordered the Marines to provide plans by January 15th for boot camp to go coed.  ABC.com reports that “Mabus also warned Marine Corps leaders not to use any concerns about integrating women into combat jobs as ways to delay the process.”  The problems with integrating boot camp are the same as those of integrating the combat arms, so the Marines are not allowed to talk about it.  Secretary of Defense Ashton Carter used this tactic when, ahead of his Dec. 3 decision, he put a gag rule on discussing women in combat and the Marines’ 9 month integration study which showed that compared to males in combat tasks, female Marines were slower, couldn’t lift as much weight, were less accurate shooters and retained more than twice the injuries.  Now the Marines must comply not only with integration of the combat arms but, suddenly, integration of boot camp, post-haste.  Any problems with either will be blamed on leadership and training.  That leadership will be purged and purged again until everyone is singing the right tune.  If you were interested in what Soviet-style dictatorship looks like, this is it.

As a nation, we already compared separate-sex and coed boot camps and found the Marine Corps’ methods far superior.  In the 1999 Congressional Commission on Military Training and Gender-Related Issues, the commission’s chairman, Anita Blair said, “gender-integrated training entails special problems that simply do not arise in gender-separate training. These problems revolve around the difficulties of providing appropriate privacy for both sexes, accommodating fundamental physiological differences, and controlling sexual conduct.” 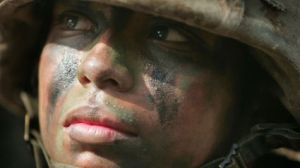 The Army knows intimately what can go wrong combining young end-of-teen-aged kids together in the formative period of boot camp.  Remember Aberdeen?  Multiple Army drill sergeants were abusing their authority and having sex with or raping females under their charge.  Even when relationships are consensual the damage can be just as great.  The expenses are high in time, money and effort to shuffle personnel due to relationships, fraternizing, pregnancy, misconduct and the litigation thereof, let alone the destructive impacts to the personnel themselves and their units.  That we’ve come to tolerate this mess in the fleet and other branches’ boot camps hardly justifies doing more of it by forcing the Marines to follow suit.

If there’s one thing that’s primal and unchanging, it’s that men and women are distracted by each other.  The second you throw them together they’re checking how they look and competing for each other’s attention.  The fallout can run the spectrum from marriage and/or babies to serving in the brig for rape.  It’s as predictable as the sun rising in the east, and all the ripples created detract from the objective: training to become the nation’s enemy-killers.  Advocates for total integration insist “we’re professionals,” as if professionals don’t hook up and mess up their lives and jobs.  Regardless, new recruits are hardly professionals, and boot camp is not an office job.  Harassment?  That’s boot camp: you can’t train young kids to attack and defend without some touching.  A drill instructor’s simple correction or instruction can be construed as harassment when done by the opposite sex.

Having separate boot camps allowed the Marines to postpone or at least greatly minimize the opportunity for all these problems until after recruits had finished their training and earned the title.  (The repeal of Don’t Ask Don’t Tell has worked to sexualize areas that were once neutral, worsening these negative impacts.  Same-sex sexual assaults are on the rise since its repeal.)

Double standards for women have been in place since their full integration into the military in 1948 because every time they tested against men’s standards, they didn’t perform as well as the men and retained more injuries.  Also, men and women don’t like being treated the same.  What’s neutral between men can be considered harassment to a woman and vice versa, and what’s tough for women tends not to be challenging enough for men.

When West Point was integrated and 61% of female plebes failed the men’s physical fitness test (PFT) compared to less than 5% of men, separate lower standards were created for women.  It was the same in the Air Force’s Cadet Wing when they couldn’t perform the pull-ups or complete most of the men’s other standard tests.  In every branch’s PFT, women have more time to run and don’t have to do as much or the same requirements as men.  In 2013 the Marine Corps tried to get female recruits to achieve the men’s minimum three pull-ups and gave active duty females the option to do pull-ups instead of the arm-hang.  They dropped the requirement when, in over a year of boot camp cycles training for the goal, less than half of female recruits (compared to 98% of males) could make the standard and only 15% of active duty females elected to do them at all.

Marine General John Kelly is right in saying “There will be great pressure” to lower the standards to accommodate women and fulfill the Obama administration’s destructive policy.  While claiming there will be no quotas, Mabus has already demanded an increase to 25% female representation in the ranks.  The only way to satisfy that requirement is to lower those standards.  They will call them gender-normed “new” standards, and “equal” will be equally lower for all.

Recruiters now have an impossible task to perform.  Women are already five times harder and more expensive to recruit because very few women want to join the military and fewer are qualified.  While having to pull in much greater numbers to reach that 25%, the young women who can make combat standards is a yet smaller pool even in the age of Crossfit.  Now that women’s combat exemption is to be fully repealed, the potential for involuntary assignment to combat jobs and competing with men in those jobs are all deterrents for young women thinking of enlisting.

The Marines have been the last hold-outs on integrating training just as they have been for the combat arms because the Marines are in the business of killing.  Gen. Kelly had it right when he said the question is whether or not this policy makes us more lethal: “If the answer to that is no, clearly don’t do it…”

Recruits graduating coed boot camp will be a lower-caliber breed of Marine, Guinea pigs required to follow orders and “prove” integration a success.   Injuries and misconduct will increase even as standards are “gender-normed” lower, but as long as everyone delivers their lines correctly: “Women in combat is a great idea! Women are the same as men in the infantry!” that’s all that matters. That we’re supposed to be training them to fight and win against the likes of ISIS with the fewest casualties possible is irrelevant.  Ain’t modernity grand?  Full speed ahead and damn the torpedoes.